It is just an illusion | VIDEO

Astigmatism has always created me problems with 3D vision and depth, this is why I have always had hard time with anything that involves stereoscopic vision – this is maybe why optical illusion has always fascinated me a lot.

Thanks to Quora, I have found a couple of great optical illusions I am happy to share.

The illusion of sex

In the Illusion of Sex, two faces are perceived as male and female. However, both faces are actually versions of the same androgynous face. One face was created by increasing the contrast of the androgynous face, while the other face was created by decreasing the contrast. The face with more contrast is perceived as female, while the face with less contrast is perceived as male. The Illusion of Sex demonstrates that contrast is an important cue for perceiving the sex of a face, with greater contrast appearing feminine, and lesser contrast appearing masculine.
Russell, R. (2009) A sex difference in facial pigmentation and its exaggeration by cosmetics. Perception, (38)1211-1219.

In this video, wooden balls roll up the slopes just as if they are pulled by a magnet. The behavior of the balls seems impossible, because it is against the gravity. The video is not a computer graphic, but a real scene. What is actually happening is that the orientations of the slopes are perceived oppositely, and hence the descending motion is misinterpreted as ascending motion. This illusion is remarkable in that it is generated by a three-dimensional solid object and physical motion, instead of a two-dimensional picture. 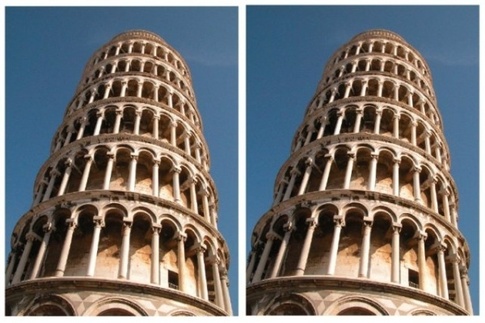 Here is a novel illusion that is as striking as it is simple. The two images of the Leaning Tower of Pisa are identical, yet one has the impression that the tower on the right leans more, as if photographed from a different angle. The reason for this is because the visual system treats the two images as if part of a single scene. Normally, if two adjacent towers rise at the same angle, their image outlines converge as they recede from view due to perspective, and this is taken into account by the visual system. So when confronted with two towers whose corresponding outlines are parallel, the visual system assumes they must be diverging as they rise from view, and this is what we see. The illusion is not restricted to towers photographed from below, but works well with other scenes, such as railway tracks receding into the distance. What this illusion reveals is less to do with perspective, but how the visual system tends to treat two side-by-side images as if part of the same scene. However hard we try to think of the two photographs of the Leaning Tower as separate, albeit identical images of the same object, our visual system regards them as the ‘Twin Towers of Pisa’, whose perspective can only be interpreted in terms of one tower leaning more than the other.
The Leaning Tower illusion: a new illusion of perspective Frederick A. A. Kingdom, Ali Yoonessi, Elena Gheorghiu Perception. 2007. 36(3):475-477 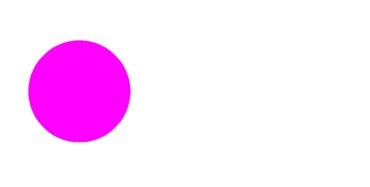 What your seeing above could be considered an illusion because your brain is abstracting what the combination or mid-point of red and blue would look like if the color spectrum looped. In reality the color spectrum does not loop or curve back on itself there is no wavelength of light in-between red meets blue. However when you see the two colors at once mixed you see magenta a color that doesn’t exist.