Do you have a startup idea? Blueseed takes you on a cruise!

Oh yeah, you read it right!  Because of the United States’ current immigration and regulatory regime, bold and creative entrepreneurs from around the world aren’t given the chance to come to Silicon Valley and develop the technologies that could be creating jobs and propelling the economy forward.

To solve this problem, the Blueseed project aims to develop an offshore site 12 miles from the coast of San Francisco where 1000 startup employees could live and work without having to immigrate to the United States. The idea already has the approval and funding of PayPal founder Peter Thiel, and a seemingly endless supply of public interest. Much of it hyperbolic. Yet this $10 – 30 million project hoping to begin work in Q3 of 2013 isn’t going to be a “slave ship” or a “libertarian utopia”. It’s just another innovative business solution to an existing problem. One that could help maintain Silicon Valley’s global dominance in entrepreneurship, and maybe even set a new tone for how businesses deal with government regulations that hamper their growth. 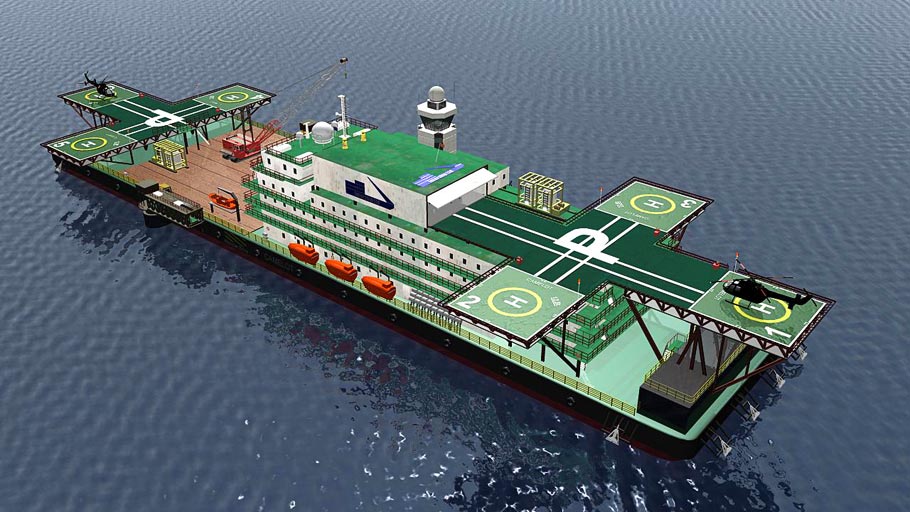 Accommodation barges, retrofitted cruise ships, or mobile platforms could all serve as potential vessels for the Blueseed project. The ship isn’t as important as the concept however: building offshore workspaces for companies that need to avoid immigration hassles.

Blueseed is a very small company of just three people: Max Marty (CEO), Dario Mutabdzija (President), and Dan Dascalescu (CIO) who was able to shed light on the vision of the project. Despite the recent economic downturn, Silicon Valley remains as one of the world’s chief locations for building a new company. There are $billions in venture capital, a community of seasoned entrepreneurs, and an atmosphere that draws intellectual talent from all corners of the globe. Yet as Dascalescu points out, securing work visas in the US is difficult, even if the employee in question has impeccable credentials. Large companies can afford to game the system in ways that smaller companies simply cannot. This means that startups that might otherwise be born in the US must instead be created in Canada, Asia, or other locations with less strict immigration policies.

Dascalescu and his partners want to stop, and even reverse that brain drain. The Blueseed Project calls for a 500 foot vessel to be moored 12 miles off the coast of San Francisco – outside of US territory but near enough to visit the city or Silicon Valley in just 90 minutes by ferry (less by helicopter). According to Dascalescu, the Blueseed ship would house scores of startups, each with typically four to seventeen employees, for a total occupation of about 1000. Depending on the accommodations desired, each occupant would pay $1200 to $3000 per month – actually less than many rental properties in San Francisco. A staff of 200 or so would keep the ship running and maintain amenities: gyms, restaurants, shops, and of course, high speed internet and WiFi. Sort of a nerdy version of a cruise ship.

Yet the Blueseed vessel’s best selling point isn’t luxury, but innovation. Dascalescu likens the opportunities to those seen in college dorms – ideas thrive and spread through a densely packed group of thinkers. Startups onboard Blueseed will be able to meet on a daily basis, casually, with dozens of other groups in their field, finding new chances at synergy. Realistically, only 10% of startups really succeed, so as the companies on Blueseed rise and fall, employees could transfer from one to another without leaving the ship. Completely new businesses that would never have been conceived of otherwise may find their birth in this undulating entrepreneurial soup on the open sea. It would be akin to the effect seen in Silicon Valley itself, but on a smaller scale. Despite the focus on circumventing immigration bureaucracy, Dascalescu states that 30% of the interest they’ve received from potential occupants are startups composed of just US personnel – including one from Texas, and another focused on artificial intelligence. The draw of the envisioned incubator is seemingly strong.

As is the media frenzy around the idea. Since its arrival in July, the Blueseed company has received attention from USA Today, NBC, Ars Technica, The Register, Wired USA and dozens of other media outlets around the world. Much of the coverage has focused on the concept of seasteading – creating autonomous sea going states that operate outside US (and any government’s) jurisdiction. It’s an old idea that’s recently developed a larger following through the Seasteading Institute – a group funded in large part by Peter Thiel.

Dascalescu stresses that finding a ‘hack’ around US bureaucracy is good for everyone. Foreign companies will gain access to Silicon Valley and be able to develop new businesses with less government hassle. Domestic interests will be served by bringing in money and talent that would otherwise be lost over seas.

That hasn’t stopped commenters on media websites from reaching new levels of crazy when it comes to discussing Blueseed. Dascalescu recounts how one comment threatened to shoot down the vessel with a Tomahawk missile. My favorite was a simple demand to “Get Off Our Land”. (Considering the water borne nature of the project one hopes it was made ironically.) There are many myths that Dascalescu has to dispell, such as the vessel will be a slave ship that employees cannot leave. Actually, every occupant will have to deposit enough money up front to provide for their return to their homeland in case of emergency or expulsion. Another myth: that Blueseed will have to fend off pirates. Not only have there not been pirates in the San Francisco Bay Area for more than a century, Dascalescu reports that the US Coastguard is tentatively pleased with the Blueseed project because it will provide an extra emergency landing location for their helicopters.

When stripped of all the paranoia and propaganda, Blueseed is essentially just another business venture. Offshore accommodations like the one proposed are a well established service in the oil industry. There are many companies that do nothing but build, maintain, and retrofit barges foroffshore support. One of the best contenders for the Blueseed vessel is the “Camelot” model developed by Singapore based Intership Ltd – a company whose clients include Exxon, Shell, the United Nations, and the US Navy. Blueseed is simply adapting the concept for use as a startup incubator. Fewer oil rigs and cranes, more WiFi and Starbucks.

Of course, that adaption is no meager feat. Dascalescu and his partners still have many hurdles to clear, any one of which might be lethal for the project. While they haven’t developed firm benchmarks, he provided a few of the near term items they have to tackle: Securing legal arrangements for 500+ foreign visitors coming into the Bay Area every week, establishing weather conditions at the proposed site (possibly through a buoy), analyzing soil and developing a solution for mooring the vessel, expanding their team of immigration experts, developing onshore supply logistics, developing partners with various startup incubators around the world, cultivating an accurate public image, finding a ship to retrofit, deciding which country’s flag to fly on the new vessel…The list goes on and on.

Luckily for Blueseed, the interest appears expansive as well. Thiel is leading pre-seed funding and Dascalescu expects about $500k to $600k to be secured by very early 2012. More than enough for a three man team as they formalize plans. In early 2013, they’ll begin Series A funding to raise $15M to $30M, and then actually launch in Q3 of that year. Are their funding goals reasonable? Thiel is actively pushing for the company, and Dascalescu says they actually have venture capitalists coming to them (instead of the other way around). They also get tons of free press.

The Blueseed project is certainly possible on paper. Used cruise ships (of the kind they need) or accommodation barges can be had for less than $10 million, and retrofitting is an established industry. Blueseed is already in the middle of a design contest for the vessel that will end December 12th. Supply logistics, including high speed internet, are complex, but not unheard of. Similar projects (offshore talent pools) are already seen in West Africa and many other locations around the world, albeit generally with just one company and mainly in a single field (i.e. oil).

Legal and political battles then, are probably the really definitive barrier, and they may continue to evolve for years even after Blueseed could be built. One hopes that the local, state, and federal governments will look at the underlying economic situation: The US only produces 38,000 computer science graduates a year, but has 144,000 new job openings. The Blueseed vessel itself will require 200 more staff jobs, almost certainly to be filled by SF Bay Area residents. Local economies (especially Half Moon Bay near the proposed mooring site) will benefit from supplying the vessel. An incubator of this kind will draw millions of dollars (if not more) into companies that will be tied to Silicon Valley and the US. A financially minded bureaucrat should look at this business hack around immigration policy and decide not to make waves.