The art of quilling | Yulia Brodskaya 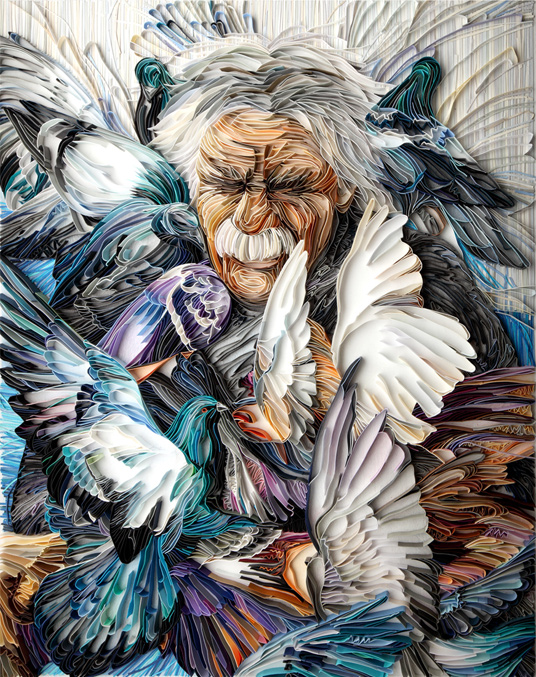 I have always found quilling not that interesting, a “pseudo” form of art loved by old folks. Well, this is what I have been thinking until two days ago, when I saw Yulia‘s works.

Actually, I had already seen one of her project – Coin’s 2010 Christmas in Wonderland advertising campaign- but I thought it was only a computer generated image. Not a quilling masterpiece.

“I believe that one of the main reasons I enjoy the paper craft, is due to my love of the material: paper. Although I’ve always had a special fascination for paper, it has taken me a while to find my own way of working with it; and then it took a little longer to find out that the technique I have been using so intensively is called quilling – it involves the use of strips of paper that can be rolled, shaped, and glued to the background.

This artwork is the first piece in the series of works which I consider a declaration of love to the material and the technique. It is also an attempt to raise a profile of this paper craft, which has been previously regarded with some disdain, and to bring this type of artwork on a new level in terms of its ability to convey meaning and emotions.

Initially, I was concerned about the limitations of the quilling technique and the material from which the work is constructed – paper & card – as it very much dictates what can and cannot be said within the boundaries of the chosen medium. However, this material limitation turned out to be a strength for me: there is the potential to contain thoughts and ideas in unique ways so that the medium can become a significant part of the message. Thus, after working with paper quilling for over three years I am at a point where I don’t feel constrained by the technical challenges of the medium; I’m eager to keep experimenting, and this piece is just a beginning.

I t would be difficult to avoid mentioning one of the questions I am often being asked about my commercial paper works, which is, ‘How long does it take’. Obviously this work took a lot longer than any of the commercial works I’ve done so far. In this laborious work the process has also become important: to my opinion, spending endless hours and days on a piece of work gives the suggestion of great care; not in vain the notion of ‘care’ is implied in the word ‘to craft’ itself.

Being a three dimensional object, the artwork offers multiple views depending on the angle of perception and the intensity and direction of lighting. These things can drastically change the visual experiences and emotional message of the same artwork. The rough snaps below should not only help to see some work in progress stages, but also demonstrate the versatility that can be achieved by playing with lighting and angles”

4 thoughts on “ The art of quilling | Yulia Brodskaya ”